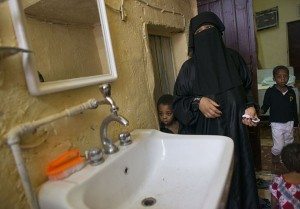 With its vast oil wealth, Saudi Arabia has one of the highest concentrations of super rich households in the world. But an estimated 20 percent of the population, if not more, lives in crippling poverty. Beggars panhandle in the shadows of Riyadh’s luxury shopping malls, and just a few kilometers away families struggle to get by in the capital’s southern slums. While the government has finally acknowledged that poverty is a problem in the kingdom, the world of the Saudi poor is largely hidden from sight.

Accessing this world is a difficult undertaking for foreign journalists, granted only with the assistance of a few dedicated social workers who risk government opprobrium to expose the realities of life lived on the margins. The Saudi state offers free health care and education, but little in the way of income assistance or food stamps. Many poor Saudi families rely on handouts from private citizens instead. Muslims are expected to give a portion of their annual income to charity, and many go beyond the bare minimum.

Prince Al Waleed bin Talal, Saudi Arabia’s richest investor, estimates that he has given several billions of dollars in charity over the past 30 years, much of it wired directly to the accounts of petitioners who apply to his office for assistance with paying back loans, buying a car or getting married. It’s not necessary, but most of those supplicants visit the prince in person as part of a weekly ritual dating back to the early days of the al Saud dynasty. They line up to deliver their requests. Several pause to recite poems in praise of his generosity. The government has pledged to eradicate poverty, but it is a difficult and long-term undertaking made all the more complex by a rapidly growing population and a paucity of jobs.