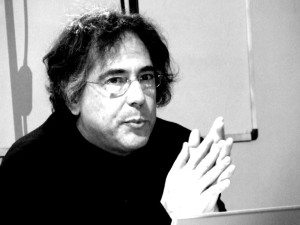 US President Barack Obama’s GCC summit at Camp David this week looked like a better fit for the annals of surrealism than geopolitics.

The GCC petrodollar racket – Saudi Arabia, UAE, Qatar, Kuwait, Bahrain and Oman – was screaming for a “security deal” with Washington similar to the “special relationship” with Israel. Well, that won’t happen because it would require US congressional approval, a no-no considering the Israel lobby runs the overwhelming majority of the US Congress.

So their next best option was to scream to get a kind of formal NATO alliance; well, that is almost the case, as in the war on Libya, which was a de facto NATO-GCC operation. Call it Wahhabi-Atlanticism.

In the end, what they will certainly get is loads more expensive American weapons. Indeed, this is already the case – a bonanza for the industrial-military complex – plus stacks of American trainers.
As for the extra bonus, that’s unlikely. They were also screaming for an iron clad, missile defense-style, shield to protect them from “Iranian aggression.” This is nonsense. Assuming a nuclear deal is clinched in late July between Iran and the P5+1 – of supreme interest to the EU, China and Russia – Tehran will not only be “normalized” in the West, but will receive a massive influx of funds as soon as sanctions are lifted.

Compare it with the unspoken agenda – especially for the House of Saud, falcons in the Emirates, and the tough regime in Bahrain; Iran should be sanctioned to Kingdom Come, and remain a perennial pariah in the West. 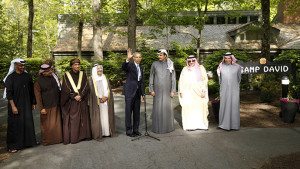 What makes it even more absurd is that GCC’s combined military spending is much higher than Iran’s. There are also internal divisions. Oman, softer than the other GCC members, is friendly towards Tehran. And the UAE – especially via Dubai – can’t deny it enjoys a bonanza of Iranian investment.

In the end, we had the proverbial long, vague statement stressing the parties would pursue more joint military exercises and cooperate on a lot of topics, including ballistic missile defense. There are also plans to fast track their weaponizing. And they stressed their “unity” in fighting against ISIS/ISIL/Daesh.

Beware of vassals asking for gifts

It’s no mystery what the GCC – a convenient post-appendix of the extinct British Empire – actually excels in is buying military junk for billions of dollars and in the case of the House of Saud, fixing the price of oil. Most GCC members harbor massive guest worker populations – essentially from South Asia – that largely dwarf the locals and barely manage to survive in a ghastly sweatshop trap while enjoying zero human rights.

Extra absurdity is added by Qatar and Saudi Arabia supporting their own, not necessarily conflicting, networks of Salafi-jihadis in Syria. The House of Saud also unleashed the Pentagon-style “Decisive Storm”, an illegal war/bombing/ “kinetic operation” on Yemen – which Beltway myth, in pure Orwellian fashion, rules is an “effort” Washington merely “assists.”

Proverbial US corporate media hysteria rules that ISIS/ISIL/Daesh may be about to take over Texas or bomb New York. However, most GCC stalwarts remain paranoid; in their dim-witted worldview, smashing the fake Caliphate that empowers the Shiite-majority government in Baghdad, led by Haydar al-Abadi of the Da’wa Party, which treats Wahhabis for what they are: intolerant, armed and dangerous.

So, faithful to a renewed paranoid streak, and calculating he would not get any major gift from the self-described “Don’t Do Stupid Stuff” Obama administration, the new House of Saud capo, King Salman, threw a fit and just sent his new crown prince, Muhammad bin Nayef. Anyway, he’s the go-to guy in the “new” House of Saud, as I examined here.

And then there’s the ghost of Osama bin Laden.

Seymour Hersh’s recent exposé of the bag of White House lies concerning bin Laden’s snuffing out continues to make waves. Most of the revelations were already reported in 2011, via other sources.

So what now emerges is that bin Laden was initially captured by the Pakistani Inter-Services Intelligence (ISI) and kept under strict vigilance in Abbottabad from 2006. He was ratted on by a former senior ISI official, who bagged a fortune and is now comfortably ensconced, with family, in Virginia.

A leading Pakistani daily had been on the story for a while. And soon another one confirmed the informer’s identity.

Having seen the CIA in action from AfPak to Iraq, I was not surprised, it could not have found even one of bin Laden’s brown Pashtun blankets, contrary to established Hollywood myth of the Zero Dark Thirtyvariety.

As for the kill, it was – as in Nevada drone slang – just a kill, a targeted assassination. Once again contrary to myth, bin Laden was not carrying his Kalashnikov and did not use one of his wives as a shield.

Hersh is spot on when he writes: “High-level lying nevertheless remains the modus operandi of US policy, along with secret prisons, drone attacks, special forces night raids,” etc.

And a key element in the whole charade is – once again – the long hand of the House of Saud. Here’s the killer quote from Hersh’s top CIA source:

“The Saudis didn’t want bin Laden’s presence revealed to us because he was a Saudi, and so they told the Pakistanis to keep him out of the picture. The Saudis feared if we knew we would pressure the Pakistanis to let bin Laden start talking to us about what the Saudis had been doing with Al-Qaeda. And they were dropping money – lots of it! The Pakistanis, in turn, were concerned the Saudis might spill the beans about their control of bin Laden. The fear was that if the US found out about bin Laden from Riyadh, all hell would break out. The Americans learning about bin Laden’s imprisonment from a walk-in was not the worst thing.”

I have examined here why the whole “war on terror” is a fraud. What makes it different now is that the real Masters of the Universe who run the Washington/Wall Street axis seem to have had enough of the House of Saud.

Now even the New York Times is allowed to print: “Saudi support for the Afghan jihad decades ago helped create Al-Qaeda”. That would have been off limits until recently. The same story also points out that new King Salman “was a royal point man and fund-raiser for jihadists going to Afghanistan, Bosnia and elsewhere.”

It’s not a coincidence that this kind of story shows up exactly as Salman “snubbed” Obama by not going to the Wahhabi-Atlanticist party in Camp David.

So here’s the bottom line: those who financed Osama bin Laden in the first place, and then paid the Pakistanis to keep him locked up, now want all sorts of iron clad security deals with Washington to make sure they stay in power forever. And continue to be the ideological matrix of a thousand new Osamas.

No, you can’t make this stuff up.