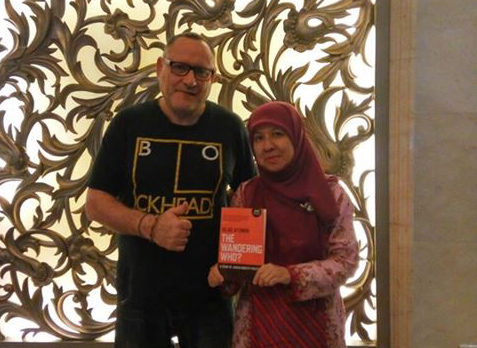 Gilad Atzmon is a Jazz saxophonist. He was born in Israel and was a former soldier in the Israeli army.  Now he lives in the United Kingdom and becomes the advocate of the Palestinian cause. His book, The Wandering Who, explains very well about the nature of Israel regime and the root of the Palestinian conflict. Prof James Petras said, “This book is more than a study  of ‘Jewish identity politics’  insofar as we are dealing with a matrix of power that affects all who cherish self-determination and personal freedom in the face of imperial and colonial dictates.”

Few months ago, Dina Y. Sulaeman, the Director of Indonesia Center for Middle East Studies have interviewed Mr Atzmon. There are many interesting topics in their discussion, including how identity politics also can endanger Indonesia as a nation and how Syrian conflict has distracted public opinion towards Palestine.

Gilad: No, not at all. In my new book, ‘Being in Time – A Post Political Manifesto,’ I present a universal approach to identity politics.

Jewish identity politics is a model for identity politics in general. In the west, we have witnessed the evolution of gay ID politics, black ID politics and so on. ID politics operates to teach people to speak and think ‘as a’;  ‘as a black’, ‘as a lesbian’, ‘as a feminist’, ‘as a Muslim’, etc. It is an attempt to break apart all the established and traditional social structures. Why? Because, the Jewish elite is fearful of the old structures, they tend to believe that anti-Semitism is rooted in the established edifice and in working people being united. The Frankfurt School and thinkers like Wilhelm Reich managed to revolutionise society– in the name of ‘progress,’ we are now divided and detached from our ‘reactionary’ roots.  But it is devastating that the left has been united against working people forging a cohesive identity… this is very strange because the left is supposed to look after the working people and unite and inspire them to action. The left in the west is disturbed by the fact that the working people always vote for the flag, for the right, for the nationalist, for Trump, for Hitler and so on. Accordingly, modern ID politics is a project that developed out of this unique intellectual and political bond between the left and Jewish intelligencia. The Jews are better at ID politics than any other group for an obvious reason. For the  gay, the black, the Muslim, the feminist or the lesbian, ID politics  is a new thing.  Jews have been doing it  for 3000 years — Jewish culture is identity politics.

It would be reasonable to argue that ID politics is an attempt to Jewify (as opposed to Judify)  the entire social order. It has been a project that has caused some devastating cultural, social and political impacts.

Dina: So, there are differences between the  ‘Jew’ and ‘Judaic’ thing.  In your book, you said that the problem, in Palestine for instance,  is  Jewishness rather than  Zionism. Can you explain it?

Gilad: It is confusing. Jewishness is the belief that the Jews are somehow special, chosen, privileged and should enjoy and celebrate their privilege. Not all Jews subscribe to this idea, but many of them do. Even the Jewish anti-Zionist will say, ‘listen to us, we can say something that you (goyim, gentiles) can’t, we as the Jews in the movement,  give you a ‘kosher stamp.’ They are  basically claiming that ‘we are privileged’.  Even Jewish anti-Zionists subscribe to hard corechoseness. Norman Finkelstein, whom I admire intellectually, used  to say, “I can say it because my mother was in Auschwitz.”  What about you Dina? Your mother wasn’t in Auschwitz, can you still think or express your thoughts ? Or support Palestine? Or do you have to send your mother to Auschwitz before you make a judgment on Israel or other aspects of Jewish power? Choseness is, unfortunately, embedded in Jewish thinking.

Zionism is just one symptom of Jewish choseness. Interestingly enough, and this is my first time I have said this in an interview, some people, including some of my best friends, say that ‘Judaism was hijacked by Zionism.’  I say NO.  It is the other way around — Zionism was hijacked by Jewishness and eventually Judaism.

Zionism was initially an anti-Jewish movement. Zionism started in  the late 19th century. It proclaimed that Diaspora Jews were an ugly parasitic identity; they didn’t  work, they didn’t  farm, they were traders and bankers, capitalists, usurers, exploiters and so on, ..but this wasn’t entirely their fault. It had happened because Jews  didn’t  have a land of their own. “Once we settle in Palestine, all of that will change.”  And, indeed, they went to Palestine and for two weeks they worked on the land and built factories.  But then they found out that the Palestinians were cheaper [labor] and they all became Jews again.   It is amazing that Zionism was a secular movement that promised to ‘civilise’ the Jew. But then ideological Zionism was hijacked by Jewish exceptionalism and later by Judaic choseness. While early Zionism operated to defeat choseness, Israel and Zionism have little to offer but chosenism.

Dina: but then when we say that the root of the Palestinian problem is Jewishness (not Zionism), they will call us anti-Jew or anti Semites.

Gilad: It is not nice, but this is a tactic that has been used to silence the discussion. However, we are not talking here about individual  people, we are referring to ideology and we are supposed to be able to criticize ideology. But, as we can see, some Jews don’t want us to do that, and for an obvious reason!

Do you have identity politics here in Indonesia?

Dina: well..yes… We have some Muslim groups that keep saying that the muslims are oppressed by the Chinese and the Christians; they accused the government of being pro-Chinese/Christian.

Gilad: I’m not familiar with Indonesian society and politics, but you just confirmed  what I have been saying –identity politics is always used as an attempt to weaken the hegemonical structure.

As a nation, we enjoy  the ability to mobilise  as one people. It doesn’t matter if you are Muslim, Christian, or Hindu, we are together, caring for each other, because we share the same land, and our most important values as a country are health, education, and work (production, manufacturing). If I speak instead ‘as a Muslim,’  ‘as a Christian,’  ‘as a woman,’  ‘as a lesbian,’ I contribute to the breaking of society into sectors. The most interesting thing about the sectorial break is that each sector is a cosmopolitan one. If I define myself as a Muslim identitarian then the border of my identity is not the physical border of Indonesia, it extends to Malaysia, the Middle East, the Balkans and even Europe and the United States. If I define myself as a gay, the border also transcends  beyond my country. This is exactly how Jewish identity operates. Jews, as we know,  are not attached to any piece of geography, it is a cosmopolitan  identity.  Zionism initially attempted to defy Jewish cosmopolitanism.

In America, for instance, I speak about the patriots vs. the identitarians, the patriots who see themselves primarily as Americans. So you can be black, you can be gay, you can be a Jew, but you say: I’m an American who happens to be black, I’m an American who happens to be a Jew, I’m an American who happens to be gay. But the identitarians  see themselves primarily as sectarians:   I’m a gay who lives in America, I’m a Muslim who lives in America.  And it’s a very big difference. Because if you are primarily gay, your primary interest is in promoting gay rights and gay interests, for example, to have a dedicated hospital for AIDS. If you are black, you want to see special budget allocations for black people and their needs. But for patriots, whoever they are, the most important thing is a new factory so that we, as a collective (gays, black, Jews, women etc) , have a good reason to wake up in the morning and go to work.

Dina: So in your view, nationalism is very important, right?

Dina: Now I want to talk about Syria with you. Do you think the Syrian conflict distracted public opinion towards Palestine?

Gilad: It did, this is a very clear observation. The crisis in Syria is a hideous  disaster and it has definitely distracted attention from Palestine, and who benefits from that? Israel, of course. This is why it shouldn’t surprise us that the major players in the creation of this crisis were Israel and its supportive Jewish Lobbies. And it shouldn’t surprise us that Israel and the Jewish Lobby are now changing sides. In the beginning they supported Al Nusra, now they seem to be with the Russians. Turkey has switched sides too, they still don’t like Assad but they prefer Assad to having a Kurdish State on their eastern border . So we are dealing with a level of deadly global opportunism. Many within the the pro-Palestinian activist network  are also changing sides, they were anti Assad initially and are now pro Assad.

The Palestinian leaders  were not very politic here. The Assad regime was very supportive of Palestine. Hafez, Bashar’s father, fully supported Hamas. It was devastating  to see how quickly Hamas decided to oppose Assad. I understand why it happened… Qatar, the Saudis, the Sunni alliance, the Muslim Brotherhood. I don’t like to criticize Palestinians and their politics  but they were not very clever here.

Dina: ok last question, what is the future of Palestine?

Gilad: I don’t think that we are moving toward a peace negotiation, a peace plan or an orchestrated reconciliation. When people talk about two states, what they really mean is two Jewish states. But I believe that within the next 20-30 years we will see a Palestinian majority on the land. It’s a just a matter of time. Here I agree with Abbas. Everybody likes to hate Abbas. But Abbas understands that time is on the side of the Palestinians. For Abbas demography is the one and only Palestinian bomb.

Dina: So you don’t agree with jihad?

Gilad: I didn’t say I am against jihad. If Palestinians resist, they will always get my support. They live in hell and I will always support them. This is my role. But I’m not in position to advocate a solution or push a political or military mantra. I see myself as a (Hebrew speaking) Palestinian,  but I don’t live there. I cannot urge people to get themselves killed while I live comfortably in London. I cannot tell them to sit and wait either. It is not my role. My job as an intellectual is to try to explain what is happening. Abbas says that if we engage in active war, they [the Israelis] will throw us all out, they will kill us, they have no mercy, and he is absolutely right. So, we just have to sit and wait;  this land will be Palestine from river to the sea.

Dina: do you refer to  demography?