What is Middle East?

The Middle East (also called the Mid East) is a region centered on Western Asia and Egypt. The eurocentric term is used as a synonym for Near East, in opposition to Far East. The corresponding adjective is Middle Eastern and the derived noun is Middle Easterner. Arabs, Azeris, Kurds, Persians, and Turks constitute the largest ethnic groups in the region by population,[1] while Arameans, Armenians, Assyrians, Circassians, Copts, Druze, Jews, Maronites, Somalis, and other denominations form significant minorities.

The history of the Middle East dates back to ancient times, and the region has generally been a major center of world affairs. However, in the context of its ancient history, the term “Near East” is more commonly used. Several major religions have their origins in the Middle East, including Judaism, Christianity, and Islam; the Baha’i faith, Mandaeism, Unitarian Druze, and numerous other belief systems were also established within the region. The Middle East generally has a hot, arid climate, with several major rivers providing irrigation to support agriculture in limited areas such as the Nile Delta in Egypt, the Tigris and Euphrates watersheds of Mesopotamia, and most of what is known as the Fertile Crescent. Most of the countries that border the Persian Gulf have vast reserves of crude oil, with the sovereign nations of the Arabian Peninsula in particular benefiting from petroleum exports. In modern times the Middle East remains a strategically, economically, politically, culturally and religiously sensitive region. 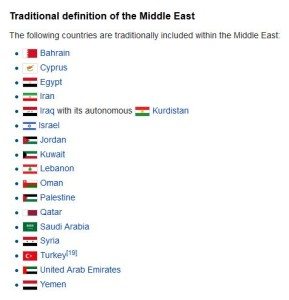 The term “Middle East” may have originated in the 1850s in the British India Office.[2] However, it became more widely known when American naval strategist Alfred Thayer Mahan used the term in 1902[3] to “designate the area between Arabia and India”.[4][5] During this time the British and Russian Empires were vying for influence in Central Asia, a rivalry which would become known as The Great Game. Mahan realized not only the strategic importance of the region, but also of its center, the Persian Gulf.[6][7] He labeled the area surrounding the Persian Gulf as the Middle East, and said that after the Suez Canal, it was the most important passage for Britain to control in order to keep the Russians from advancing towards British India.[8] Mahan first used the term in his article “The Persian Gulf and International Relations”, published in September 1902 in the National Review, a British journal.

The Middle East, if I may adopt a term which I have not seen, will some day need its Malta, as well as its Gibraltar; it does not follow that either will be in the Persian Gulf. Naval force has the quality of mobility which carries with it the privilege of temporary absences; but it needs to find on every scene of operation established bases of refit, of supply, and in case of disaster, of security. The British Navy should have the facility to concentrate in force if occasion arise, about Aden, India, and the Persian Gulf.[9]

Mahan’s article was reprinted in The Times and followed in October by a 20-article series entitled “The Middle Eastern Question,” written by Sir Ignatius Valentine Chirol. During this series, Sir Ignatius expanded the definition of Middle East to include “those regions of Asia which extend to the borders of India or command the approaches to India.”[10] After the series ended in 1903, The Times removed quotation marks from subsequent uses of the term.[11]

Until World War II, it was customary to refer to areas centered around Turkey and the eastern shore of the Mediterranean as the “Near East”, while the “Far East” centered on China,[12] and the Middle East then meant the area from Mesopotamia to Burma, namely the area between the Near East and the Far East.[citation needed] In the late 1930s, the British established the Middle East Command, which was based in Cairo, for its military forces in the region. After that time, the term “Middle East” gained broader usage in Europe and the United States, with the Middle East Institute founded in Washington, D.C. in 1946, among other usage.[13]

Criticism and usage
The term Middle East has been criticized as implicitly Eurocentric.[14][15] In contemporary English-language academic and media venues, the term is used by both Europeans and non-Europeans.

The description Middle has also led to some confusion over changing definitions. Before the First World War, “Near East” was used in English to refer to the Balkans and the Ottoman Empire, while “Middle East” referred to Iran, the Caucasus, Afghanistan, Central Asia, and Turkestan. In contrast, “Far East” referred to the countries of East Asia (e.g. China, Japan, Formosa, Korea, Hong Kong, etc.)

With the disappearance of the Ottoman Empire in 1918, “Near East” largely fell out of common use in English, while “Middle East” came to be applied to the re-emerging countries of the Islamic world. However, the usage “Near East” was retained by a variety of academic disciplines, including archaeology and ancient history, where it describes an area identical to the term Middle East, which is not used by these disciplines (see Ancient Near East).
The first official use of the term “Middle East” by the United States government was in the 1957 Eisenhower Doctrine, which pertained to the Suez Crisis. Secretary of State John Foster Dulles defined the Middle East as “the area lying between and including Libya on the west and Pakistan on the east, Syria and Iraq on the North and the Arabian peninsula to the south, plus the Sudan and Ethiopia.”[12] In 1958, the State Department explained that the terms “Near East” and “Middle East” were interchangeable, and defined the region as including only Egypt, Syria, Israel, Lebanon, Jordan, Iraq, Saudi Arabia, Kuwait, Bahrain, and Qatar.[16]

The Associated Press Stylebook says that Near East formerly referred to the farther west countries while Middle East referred to the eastern ones, but that now they are synonymous. It instructs:

Use Middle East unless Near East is used by a source in a story. Mideast is also acceptable, but Middle East is preferred.[17]

At the United Nations, the numerous documents and resolutions about the Middle East are in fact concerned with the Arab–Israeli conflict, in particular the Israeli–Palestinian conflict, and, therefore, with the four states of the Levant. The term Near East is occasionally heard at the UN when referring to this region.