Overview of Oil and Natural Gas in the Eastern Mediterranean Region 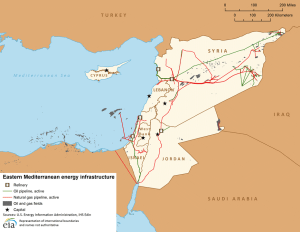 Offshore natural gas discoveries in the Levant Basin have the potential to significantly alter energy supply dynamics in the eastern Mediterranean region, however several outstanding issues—including armed conflict, territorial disputes, and macroeconomic uncertainty—could limit the viability of those supplies in the short term.

The eastern Mediterranean region—defined in this report as Cyprus, Israel, Jordan, Lebanon, Syria, and the Palestinian Territories—is currently undergoing changes to its energy landscape. With expected economic growth, and the population of the region forecast to grow from 45.3 million in 2010 to between 58 and 62 million in 20301, energy demand should increase noticeably over the next two decades. At present levels of consumption, regional oil and natural gas reserves are unlikely to last for more than a few decades. Fortunately, recent discoveries of large hydrocarbon resources—particularly natural gas—in the offshore Levant Basin significantly alter the supply-side forecasts for the region. These discoveries have the potential to provide the necessary energy supply to meet growing regional demand and possibly even spur exports.

There are several issues facing the region that could significantly affect how quickly and how successfully such changes occur. Among the major issues in the region, physical and economic security as well as offshore hydrocarbon development will have the most influence on the region’s energy sector. Unrest in Syria and Egypt and territorial disputes between several of the countries in the eastern Mediterranean will impact regional energy production, consumption, and trade. Further, negative economic developments in the region—influenced by issues such as the Cyprus debt crisis and the war in Syria—could undermine demand, interrupt production and trade, and threaten the viability of several energy infrastructure projects. Overcoming these challenges is critical to the success of the region’s energy future.

The hydrocarbons sector began developing in the eastern Mediterranean approximately 80 years ago when oil exploration began in Syria following the successes in neighboring countries such as Saudi Arabia. Commercial oil production in Syria did not begin in earnest until the 1960s, while oil exploration activities in Israel and Jordan ramped up in the 1960s and 1970s, although with far less success than in Syria. Nevertheless, production at very low levels persists in both Israel and Jordan. Both Syria and Israel are also natural gas producers, although those sectors did not develop commercially until the 1980s in Syria and the mid-2000s in Israel. Jordan has had very low levels of production of both oil and natural gas since the 1980s, and the country relies primarily on imports to meet internal demand. In Cyprus, Lebanon, and the Palestinian Territories oil exploration and development is still in its infancy, however each hopes to capitalize on successful offshore exploration in the Levant Basin to develop domestic natural gas resources.

Efforts to move energy resources through the eastern Mediterranean region, located between the major supply countries in the Middle East and major demand centers in Europe, have been ongoing for decades. Even before beginning oil and natural gas operations of their own in the 1960s and 1970s, eastern Mediterranean countries—notably Syria—often benefitted from transit fees paid to them by nearby exporters like Iraq and Saudi Arabia. Today, there is considerable focus on exploration and new projects, but international transit remains a key policy consideration of several eastern Mediterranean countries. As the region continues to discover and develop hydrocarbon resources, the pressure to increase its role as an important energy hub is likely to increase.

While most of the historical production in the eastern Mediterranean countries came from the Western Arabian Province and the Zagros Province, the Levant Basin is the center of most of the recent exploration activities in the region.

The eastern Mediterranean region includes eight significant basins (Cyprus basin, Eratosthenes High, Latakia basin, Levant basin, Judea basin, Nile Delta basin, Western Arabian province, and Zagros province), with the majority of the historical hydrocarbon production occurring in the Nile Delta Basin, the Western Arabian Province, and the Zagros Province. Most of the Nile Delta Basin lies within Egypt’s territorial waters, although there is a small area under Cypriot control. To date, there have not been any significant discoveries in the Cypriot territory, although much of Egypt’s offshore oil and gas production comes from the area. The Western Arabian province basin covers large parts of Jordan and Syria, and extends into Iraq, Saudi Arabia, and Turkey. Most of Jordan’s fields and many of Syria’s are in the Western Arabian Province. The Zagros Province extends from Turkey in the north, through Iraq and Iran, terminating in the Gulf of Oman in the south. Several of Syria’s largest fields are part of the Zagros Province, but the vast majority of fields in the Zagros Province are in other countries including Iraq, Iran, and Saudi Arabia. While the Western Arabian and Zagros Provinces account for most of the historical hydrocarbon production in the region, most of the focus today is on the Levant Basin.

While the USGS estimates do not reflect the entirety of potential energy resources in the eastern Mediterranean region, the resources of the Levant Basin likely represent a large part of the overall resource base. The USGS estimate of 1.7 billion barrels of oil, if discovered, would increase the region’s proved reserves by slightly less than 70 percent, while the 122 Tcf of natural gas represents more than six times the region’s current proved reserves. An additional 1.7 billion barrels of oil in the Levant Basin would meet regional demand for roughly 20 years at current levels of consumption, while 122 Tcf of natural gas could meet current regional demand almost indefinitely. Nearly all the recent significant discoveries in the Levant Basin were of natural gas, and, while offshore exploration may eventually yield recoverable quantities of oil, to date there have not been any commercially-viable discoveries.