Yemen is rich with art and humanities due to the richness of the Yemeni culture. People value their lives and give it the pleasure it needs. Therefore, many tourists enjoy their visit to Yemen and plan to come on a regular basis. Yemeni people have the potential to start to break the ice. It may effend some but this is the Yemeni culture. People are humans and they cannot live by themselves. They share. People are to be friends.

People in Yemen may seem to have a different reactions. However, these reactions what made many people come again and enjoy that type of people. People who does not care if it rains or not, they care if it’s going to night so everyone has to leave. They will spend time together and enjoy their being together. (source)

Religion in Yemen consists primarily of two principal religious groups of Islam; Sunni and Shi’a. About 90% of the Muslim population is Sunni, and 10% is Shi’a. Sunnis are primarily Shafi’i, but also include significant groups of Malikis and Hanbalis. Shi’as are primarily Zaidis, though they also have significant minorities of Twelver Shi’as and Musta’ali Western Isma’ili Shi’as (see: Shi’a Islam in Yemen).

Less than 1% of Yemenis are non-Muslim, adhering to Hinduism, Christianity, Judaism, and Atheism. There are also approximately 3,000 Christians, 400 Jews, and a minority of Hindus. The constitution and the laws protect and inhibit the freedom of religion.
The music of Yemen is primarily known abroad for a series of pan-Arab popular stars and the Yemenite Jews, who became musical stars in Israel during the 20th century. In the Arab world, Yemen has long been a cultural center. 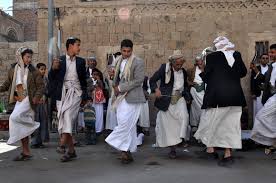 UNESCO proclaimed the tradition of poetic songs in Sana’a, called al-Ghina al-San’ani, a Masterpiece of the Oral and Intangible Heritage of Humanity on November 7, 2003.
The history of Yemeni theatre dates back at least a century, to the early 1900s. Both amateur and professional (government-sponsored) theatre troupes perform in the country’s major urban centers. Many of Yemen’s significant poets and authors, like Ali Ahmed Ba Kathir, Muhammad al-Sharafi, and Wajdi al-Ahdal, have written dramatic works; poems, novels, and short stories by Yemeni authors like Mohammad Abdul-Wali and Abdulaziz Al-Maqaleh have also been adapted for the stage. There have been Yemeni productions of plays by Arab authors such as Tawfiq al-Hakim and Saadallah Wannous and by Western authors, including Shakespeare, Pirandello, Brecht, and Tennessee Williams. Historically speaking, the southern port city of Aden is the cradle of Yemeni theatre; in recent decades the capital, Sana’a, has hosted numerous theatre festivals, often in conjunction with World Theatre Day.

The Yemeni cuisine is entirely distinct from the more widely known Middle Eastern cuisines, and even differs slightly from region to region. Throughout history, Yemeni cuisine has had a little bit of Ottoman influence in some parts of the north, and very little Mughlai-style Indian influence in Aden and the surrounding areas in the south, but these influences have only come within the last 300 years.

Chicken, goat, and lamb are eaten more often than beef, which is expensive. Fish is also eaten, especially in the coastal areas.

Cheese, butter, and other dairy products are less common in the Yemeni diet. Buttermilk, however, is enjoyed almost daily in some villages where it is most available. The most commonly used fats are vegetable oil and ghee used in savory dishes, while semn (clarified butter) is the choice of fat used in pastries. (Source)